What are the parameters monitored using Water365?

The web-based program with login credentials provides both high level of security and personal access to data for organisations. Samples of web-based software output for various parameters is given below:

Escherichia Coli:
Escherichia coli is one of the most frequent causes of many common bacterial infections, including cholecystitis, bacteremia, cholangitis, urinary tract infection (UTI), and traveler’s diarrhea, and other clinical infections such as neonatal meningitis and pneumonia. The genus Escherichia is named after Theodor Escherich, who isolated the type species of the genus. Escherichia organisms are gram-negative bacilli that exist singly or in pairs. E coli is facultatively anaerobic with a type of metabolism that is both fermentative and respiratory. They are either nonmotile or motile by peritrichous flagella. E coli is a major facultative inhabitant of the large intestine.
E. coli is present in all mammalian feces at high concentrations; it does not multiply appreciably, but can survive in water for weeks, and so it is useful as an indicator of fecal pollution of drinking water systems. E. coli meets all the criteria used for the definition of both total coliforms and fecal coliforms. In addition, the organism can be distinguished from other fecal coliforms by the lack of urease and the presence of B-glucuronidase enzymes. 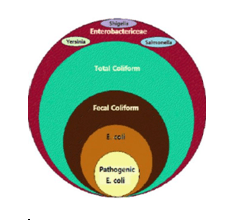 Fecal Coliform Bacteria
These organisms are a subset of the total coliform group. The fecal coliforms have the same properties as the coliform group, except that the fermentation is able to proceed at 44.5°–45.5°C. They are considered a better indicator of fecal contamination than the coliform group. Members of two bacteria groups, coliforms and fecal streptococci, are used as indicators of possible sewage contamination because they are commonly found in human and animal feces. Although they are generally not harmful themselves, they indicate the possible presence of pathogenic (disease-causing) bacteria, viruses, and protozoans that also live in human and animal digestive systems. Therefore, their presence in streams suggests that pathogenic microorganisms might also be present and that swimming and eating shellfish might be a health risk.

Color
“APHA” stands for American Public Health Association Color Scale, the organization responsible for the original definition and implementation of this visual color scale as a standard method for rating water quality. It is also called “Pt-Co” for Platinum-Cobalt Color as this visual color scale is based on stable liquid color standards made from chloroplatinate solutions. The scale ranges from distilled water at 0 (“water-white”) to a stock solution of 500 (parts per million of platinum cobalt to water). Intermediate Pt-Co color standards are made by dilution of the Pt-Co stock solution as described in ASTM D1209. Another name used for this same color scale is “Hazen”, named after Allen Hazen, the chemist who first defined the color scale for the American Public Health Association. When referenced as “Hazen Color”, the range is often above the typical 500 units associated with the APHA/Pt-Co, as in “1500 Hazen Color”. “APHA”, “PCU” and “Hazen” are three names for the same color scale.

Oxidation-Reduction Potential (ORP)
Oxidation-reduction potential (ORP) measures the ability of a lake or river to cleanse itself or break down waste products, such as contaminants and dead plants and animals. When the ORP value is high, there is lots of oxygen present in the water. This means that bacteria that decompose dead tissue and contaminants can work more efficiently. In general, the higher the ORP value, the healthier the lake or river is. However, even in healthy lakes and rivers, there is less oxygen (and therefore lower ORP values) as you get closer to the bottom sediments (mud; see the picture below of a lake bottom). This is because there are many bacteria working hard in the sediments to decompose dead tissue, and they use up a lot of the available oxygen. In fact, oxygen disappears very quickly in the bottom mud (often within a centimeter or two) and ORP falls quickly. ORP is measured in addition to dissolved oxygen because ORP can provide scientists with additional information of the water quality and degree of pollution, if present. Also, there are other elements that can function like oxygen (in terms of chemistry) and contribute to increased ORP.

Biological Oxygen Demand
Biochemical oxygen demand is the amount of dissolved oxygen needed by aerobic biological organisms to break down organic material present in a given water sample at certain temperature over a specific time period. The BOD value is most commonly expressed in milligrams of oxygen consumed per litre of sample during 5 days of incubation at 20 °C and is often used as a surrogate of the degree of organic pollution of water.

For more details of this technology, including pricing, contact Expert365 team.